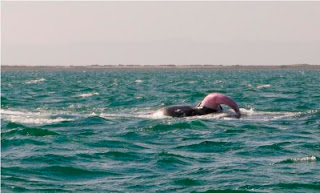 “This just became a business trip!” blurted Mel gleefully while the rest of us tried to recover from shock and awe. Mel is a urologist who had just witnessed and photographed the legendary “Pink Floyd”, or the impressive male organ of the California Gray Whale. San Ignacio is an important place for Gray Whale females to give birth to their young, but it is also a very important and active mating ground for next year’s mothers. We had all been a little worried about the numbers of whales that would show up this year after the low numbers and malnutrition of last year’s El Nino year, but 2011 has turned out to be a record year for calving mothers and numbers in general. One of the things that we’ve been witnessing has been a lot of high-action, high-energy mating going on throughout the lower lagoon. 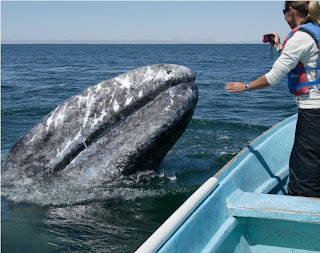 Gray whale mating generally involves three whales: two males and one female. The groups travel and roll around together for days, often swimming notably more quickly than the other whales, then swirling into a splashing, thrashing tumble of body parts. It’s hard to distinguish fluke from flipper and one whale from another as we watch from cautious distances, because mating is the one time that the whales abandon their otherwise precise spatial awareness of their peripheral body parts. The males cooperate more than compete, with one mating while the other supports the female as a “bolster pillow”. They then switch roles and take turns with the consenting female.
What we see on the surface is a turbulent confusion that is both chaotic and graceful at the same time. Finally a huge tailstock will rise up from the sea surface, seemingly defying gravity, then another with an emphatic slap and splash, then the whole group submerges for an anxious moment. “Now keep an eye out for the Pink Floyd when they surface . . .” we warn in anticipation. A head surfaces with a snorting blow, then a pectoral fin, edge of a fluke and rolling, rolling, rolling. “Oh my God, there it is!” everyone cries with excitement. Our urologist smiles with satisfaction, confirming in his camera screen that this one will end up on his office wall.
By Tom O’Brien, Campo Cortez naturalist guide.
Photo A: “What a Big Head”, by guest Jonathan Muller
Photo B: The Pink Floyd, by guest Krista Billinghurst (March 9 – 13 trip)
Posted by RedCineUnderwater at 4:28 PM