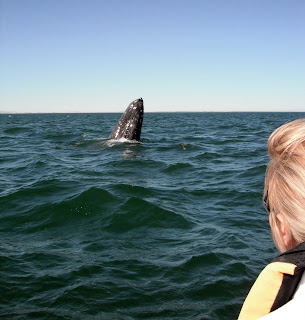 It was a beautiful sight again, buzzing the western coastline of Baja, passing over Guerrero Negro and then finding "our" lagoon with whales waiting for us. We saw a mom and calf from the air and began to see blows as soon as we got off the plane. We knew this was a good sign. Later, a million, million stars at night and the echoing voices of whale-breath as I walked out to the point and switched off my flashlight.
March 2, 2011
Whales everywhere! This is the most whale activity I've seen in the many years I've been coming down. We're seeing spy-hopping, breaching, and even mating behavior.
March 3, 2011 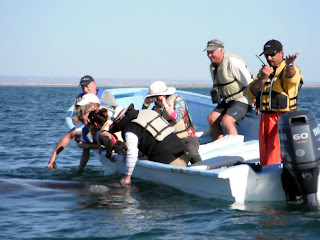 Cuco took us out to an area called "the nursery" because moms take their babies there to get them ready for the long trip north. I've never seen so many mother and calf pairs in one place before. On the afternoon whale-watch, we shared a friendly mom-calf pair with another boat. Cuco said that he recognized the pair from the morning in the nursery. The baby was so sweet, letting us pet and love on it. It was looking right at us and then rolling, on its side, closing its eye as if to say, "MMM, that feels good!" 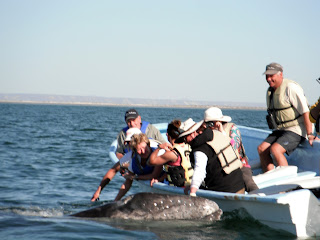 March 4, 2011
It was so fun to be with the British couple who had come such a long distance to see the whales. And, she really did say, "snogging" after she got to kiss the baby!! That's slang for making out, for those who haven't read Harry Potter!
Posted by RedCineUnderwater at 11:30 AM